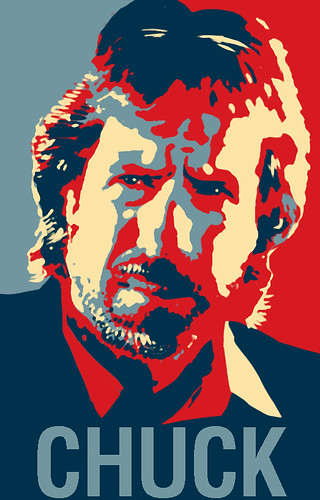 Now this is just all sorts of awesomeness not because it is likely to happen (I’m skeptical), but because it puts pressure on the Feds to behave. Apparently, Chuck “When I do a push-up I push the world down” Norris quipped recently on The Glenn Beck show that he may run for President of Texas. Even said in jest, something like this has to have been contemplated or at least joked about by Chuck Norris before in order for it to just sorta come out on national television. And based on Chuck’s recent write-up (the link), he’s clearly thought a great deal about the notion of Texas reasserting itself as a sovereign nation.

Time to move to Texas? I hear Austin is a great place to live.

Chuck is far too religiously minded for comfort, but then again, so is Ron Paul (and mind you it gave me similar pause there, as well). I’m far more worried about acolytes of the State than conservative Christians these days though. It’s also encouraging to hear someone mainstream (As Patri noted) seriously discuss the notion of secession. As I see it, it’d only take one state to break the Union before others would follow. The “United” States is so overrated — why don’t more people see that?

When I appeared on Glenn Beck’s radio show, he told me that someone had asked him, “Do you really believe that there is going to be trouble in the future?” And he answered, “If this country starts to spiral out of control and Mexico melts down or whatever, if it really starts to spiral out of control, before America allows a country to become a totalitarian country (which it would have under I think the Republicans as well in this situation; they were taking us to the same place, just slower), Americans won’t stand for it. There will be parts of the country that will rise up.” Then Glenn asked me and his listening audience, “And where’s that going to come from?” He answered his own question, “Texas, it’s going to come from Texas. Do you agree with that Chuck?” I replied, “Oh yeah!” Definitely.

It was these types of thoughts that led me to utter the tongue-n-cheek frustration on Glenn Beck’s radio show, “I may run for president of Texas!”

I’m not saying that other states won’t muster the gumption to stand and secede, but Texas has the history to prove it. As most know, Texas was its own country before it joined the Union as its 28th state. From 1836 to 1846, Texas was its own Republic. Washington-on-the-Brazos (river) served as our Philadelphia, Pa. It was there, on March 2, 1836, where a band of patriots forged the Texas Declaration of Independence. (We just celebrated these dates last week.)

On March 1, 1845, then-President John Tyler signed a congressional bill annexing the Republic of Texas. Though the annexation resolution never explicitly granted Texas the right to secede from the Union (as is often reported), many (including me) hold that it is implied by its unique autonomy and history, as well as the unusual provision in the resolution that gave Texas the right to divide into as many as five states. Both the original (1836) and the current (1876) Texas Constitutions also declare that “All political power is inherent in the people. … they have at all times the inalienable right to alter their government in such manner as they might think proper.”

Anyone who has been around Texas for any length of time knows exactly what we’d do if the going got rough in America. Let there be no doubt about that. As Sam Houston once said, “Texas has yet to learn submission to any oppression, come from what source it may.”

By the way, I actually didn’t know the Texas Republic history. I probably learned it in some social studies class but subsequently forgot all about it. Neat.