Peter Thiel, the founder of Paypal and the major donor behind Seasteading, responds to Patri Friedman’s article on “Folk Activism” (See here).

It’s always reassuring to find yourself in good company, and in Thiel’s response, he hits on the three frontiers I blogged about back on Freedom is Found at the Frontier. Yeah, it’s not like it’s hard to figure out where there’s no government, but then again, not many people are pointing this out, so I’m going to take this opportunity to pat myself on the back.

Now that I’ve done that, there’s one frontier that isn’t being talked about, and that is the frontier of day-to-day life that transpires outside the purveyance of Big Brother. Indeed, that is most of our lives, so this frontier is immensely important. Indeed, many, many people live most of their lives incredibly freely beyond the view of government. It should go without saying that one of the preeminent goals of any liberty-minded person would be to advance ways to expand this frontier and further shield life from government. And yeah, cyberspace can help do that, but we need more realspace solutions.

(1) Cyberspace. As an entrepreneur and investor, I have focused my efforts on the Internet. In the late 1990s, the founding vision of PayPal centered on the creation of a new world currency, free from all government control and dilution — the end of monetary sovereignty, as it were. In the 2000s, companies like Facebook create the space for new modes of dissent and new ways to form communities not bounded by historical nation-states. By starting a new Internet business, an entrepreneur may create a new world. The hope of the Internet is that these new worlds will impact and force change on the existing social and political order. The limitation of the Internet is that these new worlds are virtual and that any escape may be more imaginary than real. The open question, which will not be resolved for many years, centers on which of these accounts of the Internet proves true.

(2) Outer space. Because the vast reaches of outer space represent a limitless frontier, they also represent a limitless possibility for escape from world politics. But the final frontier still has a barrier to entry: Rocket technologies have seen only modest advances since the 1960s, so that outer space still remains almost impossibly far away. We must redouble the efforts to commercialize space, but we also must be realistic about the time horizons involved. The libertarian future of classic science fiction, à la Heinlein, will not happen before the second half of the 21st century.

(3) Seasteading. Between cyberspace and outer space lies the possibility of settling the oceans. To my mind, the questions about whether people will live there (answer: enough will) are secondary to the questions about whether seasteading technology is imminent. From my vantage point, the technology involved is more tentative than the Internet, but much more realistic than space travel. We may have reached the stage at which it is economically feasible, or where it soon will be feasible. It is a realistic risk, and for this reason I eagerly support this initiative. 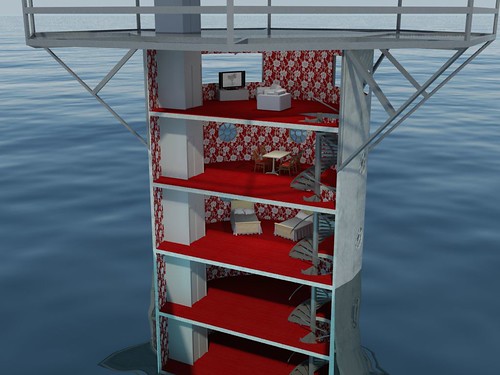 I’m not very good at remembering my dreams. And even when I do remember my dreams, I usually don’t tell them to others or write about them. This isn’t because I think dreams are meant to be private, rather I just doubt anyone would find the random musings of my subconscious mind interesting.

So bear with me.

You may have noticed recently two bright spots in the sky — they are Venus and Jupiter. I’ve enjoyed seeing them floating out there, reminding me how vast our own solar system is.

For some reason, last night I dreamed that Venus was looming huge in the night sky — visible like the moon, but even bigger, maybe even 5 – 10x the size of the moon. It was a bit frightening (seemed awfully apocalyptic to see a planet so close to the earth) even as I justified its nearness in my dream by thinking, “It’s just in a closer orbit — totally normal.”

The punchline is that tonight the moon will be just about as close to the Earth as it ever gets in its orbit. Here’s an article on the event:

On 12 December, the Moon will enter its full phase, when its disc appears completely illuminated by the Sun, just four hours after reaching its closest point to Earth. This will make it 14% bigger and 30% brighter than other full Moons in 2008, though the difference will be hard to distinguish by eye (see the difference in the full Moon’s size in 2004).

It will be eight years before the Moon appears so big again. “This evening’s Moon is not only the largest for 2008 but also during the period 1993-2016,” says Anthony Ayiomamitis, who lives in Greece.

Just a coincidence, it still struck me as odd.

Our minds are funny.