Prompted by impending fatherhood, I picked up Scott Mactavish’s The New Dad’s Survival Guide from Amazon. At only around 130 pages, Survival Guide is a tiny book relative to the growing library of pregnancy and baby books that we are rapidly accumulating these days (What to Expect When You’re Expecting, anyone?). Survival Guide is a brief overview of what to expect out of pregnancy and early child-rearing, all laced with humor and presented in a readily digestible format for us idiot fathers-to-be. The self-deprecation is only slightly tongue-in-cheek, as I feel clueless on a daily basis.

The Guide is helpful in some regards as it is such a smattering of content, even though told in brief, that it will certainly teach you something you hadn’t already heard. This is a plus.

It’s also a fun book in that it’s light-hearted, and us new dad’s need that kind of joviality given the seriousness of pregnancy (Que the thunderclap).

One thing I didn’t care for so much about the book is that it’s so basic, with large print and plenty of clip-art pictures (Not kidding), that sometimes it just seems like “what am I reading here.” But I shouldn’t have expected too much: the subtext of the cover is “Man-to-man advice for the first-time fathers / Secrets Revealed / Codes Broken / Babies Tamed.” However, given that I bought this book online, I wasn’t able to see these bits beforehand nor did I take the time to virtually flip through the pages. Had I done either, I’m not sure I would have picked it up.

But if I hadn’t, I wouldn’t have received such “Critical Survival Tips” as:

Attend childbirth education classes with the FPP. Doing so will prevent a major freak-out when a human pops out of your FPP’s private parts, as well as preparing you for your role as a birthing coach.

Get accustomed to the breast pump prior to the birth. Examine it, even take it apart, because when it’s hooked up to your FPP and milk is shooting out like a dairy, you may lapse into shock or laugh so hard that a little pee comes out.

So all in all, it was a fun read and somewhat informative; indeed, some of the specific advice could be quite useful (like preparing for the trip to the hospital).

Afterward: If anyone has any must-read books for men on new-fatherhood, please let me know!

So a guy I ping emails with mentioned to me that Treasury Secretary Hank Paulson made a great “Dr. Evil” considering his bailout bill had a pricetag of $700 BILLION. What really made the situation humorous, though, was that the bald Paulson appointed shaved-head Neel Kashkari to oversee the bailout. Thus, rather than obsess over the crashing market (1,000 point amplitude today on the DJIA!), I determined to mock up a movie poster: 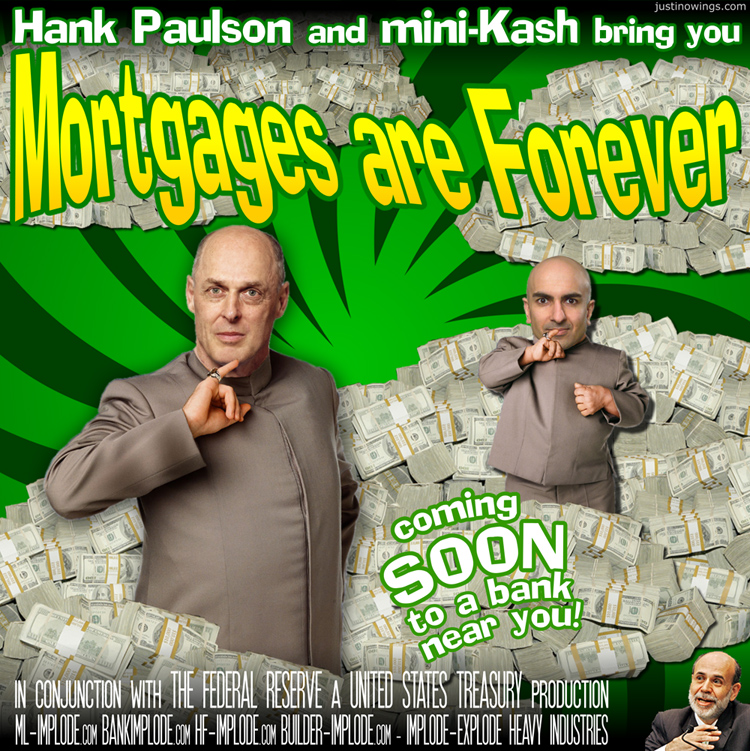 This might not be funny to a lot of you, but I enjoyed making it. And after this week of atrocious market performance, even for a bear like me, I needed the comic relief! George Carlin died at age 71. He was a damn hilarious comedian, philosopher and human observer. That is redundant.

Here are a couple of interviews with Carlin:

GC: Well, they say, “If you scratch a cynic, underneath you’ll find a disappointed idealist.” So I would imagine there’s some little flame, however weak, that still burns, but I know time is against my seeing that. I think this world would need a long time, maybe a thousand years, to evolve to what may be a golden age, and in the meantime, there are all these very small, parochial struggles between peoples of different language and color and arbitrary political and national boundaries. And my understanding of it is that there is no hope, because I think we’re locked in by commerce. The whole idea of the pursuit of goods and possessions has completely corrupted the human experience, along with religion, which I think limits the intellect. So with those two things in place as firmly as they are, I don’t see any hope for getting around them short of some sort of interesting cataclysm. So I root for a cataclysm, for its own sake, just as entertainment. I don’t even care if it has a good result. We’re circling the drain, and I just like seeing the circles get faster and shorter all the time.

Mother Jones circa 1997 (Carlin was actually married for at least 30 years prior to his wife’s death):

Q: Are you lonely?

A: There is a core of loneliness. It’s partly existential. Secondly, I was raised a loner. My parents were not there. My father was asked to leave because he couldn’t metabolize ethanol. Actually, my mother ran away with us when I was 2 months old and my brother was 5. Real dramatic stuff: down the fire escape, through backyards.

So, I sort of raised myself. I was alone a lot and I invented myself — I lived through the radio and through my imagination.

One of the interesting things about “outsidership” is that underneath it there’s a longing to belong. I just wish the thing I refused to belong to — the species, Western capital culture — was a little more respectable.

The full interviews are worth reading if you have the time.

A couple of must-see videos after the jump.